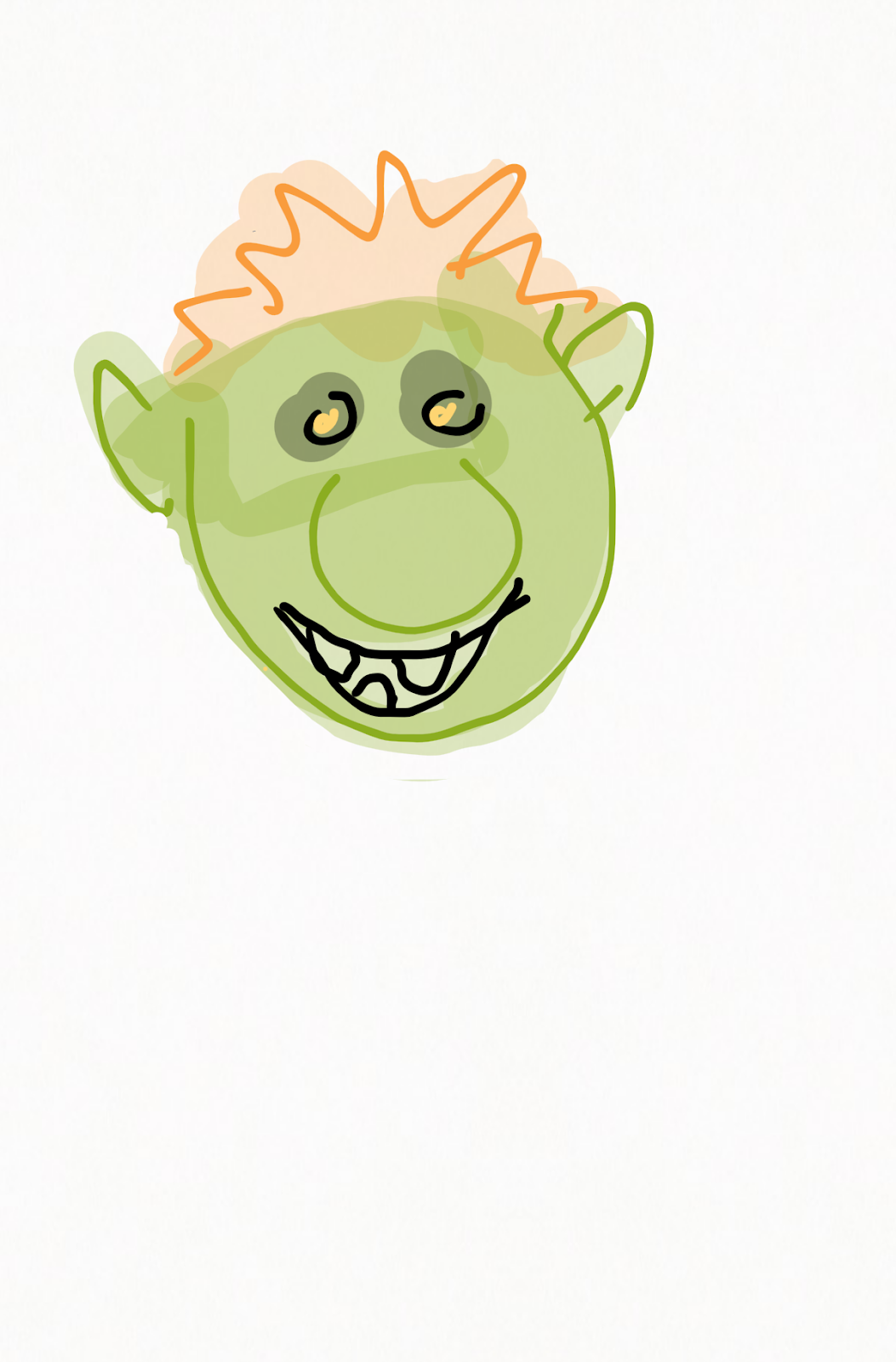 Gloop was not your everyday goblin, his bulbous nose stood out like an orange on his face with glooping snot hanging from it pretty much always. Hence his name, Gloop! you dummy!

His little black beady eyes sat atop the massive nose and blinked every few seconds, little yellow pupils in the centre. These little eyes could see both day and night which makes it confusing for our little goblin to sleep.

Now, his hair was tufty, in fact so tufty it was that he could make his very own clothes out of it. He often farted due to his diet and his over excessive drinking.

He is a very selfish creature, his massive bulging belly shows that he is a greedy little fellow.

His fat little sausage fingers were always dirty and never out of his mouth biting his fingernails, and his teeth were bent and missing in parts.

His favourite food is worm sandwiches with a lovely glass of slug juice, but if he could find some lovely bird poo. Delicious!

Now our tale begins when our very nosy hero stumbled upon an old wizard near his smelly cave.

Gloop was hunting some rotten rats when he stumbled over a log, he cursed his luck as he bounced a few times of the ground. His round stomach was very jiggly fellow readers!

Just as he was about to get up, his head tilted from side to side in a confusing way. His eyes crisscrossed and a questioning look appeared, what he saw there through the trees was a…a…thing. He didn’t know what it was.

He had never encountered a human before but he started laughing and rolling around. It was the funniest thing he had ever seen, skinny little creature with a beard and a hat.

He laughed so hard that he farted.

The fart being so loud that the human looked his direction.

“Uh-oh!” Gloop said in the normal dozy goblin way, he scuttled off away from this thing. The old thing was chasing him now and it seemed to be throwing hot things at him. One hit him in the bottom and he howled and howled, he started hopping as he ran.

“flipping eejit!” The wizard muttered under his breath. The wizard had his hands behind his back now as if inspecting the scene.

The wizard stopped and watched this extremely stupid goblin rolling around, hopping, standing up, somersaulting and rolling in the air.

“Still…an energetic flipping eejit” the wizard said, one hand came from behind his back and he threw a flash of magic at Gloop. Gloop was stuck in the air, frozen in time, his eyes able to move but nothing else.

“Ah Goblin!” the wizard exclaimed, Gloop farted in surprise, he was terrified.

The wizard laughed, he continued “Allow me to introduce myself”. The wizard bowed gracefully, his purple robes flowing as he bowed. “I am the great Greandath of the Pearl Jaguar In The Southland Of The Great Plains Of The Other Side Of A…” Gloops eyes went into spasm “Me..Greandath!” he pointed to himself getting the gist of Gloops brain power.

He flashed his hand at Gloop and instantly he was released from his frozen state, he bounced a few times and then stood up. Gloop shook himself like a dog and brushed off debris from his goblin clothes.

Gloop looked up at the wizard “you Gr..es.” he tried very hard to say the name, his eyes went crazy with using his brain which was the size of a pea. He strained hard to use it but ended up farting loudly, the wizard guffawed and slapped his hands on his robes.  This made Gloop angry. His fists clenched and he focused again “you, Gr..ea..n..dath!”

Greandath stopped guffawing “Bravo old chap! well done!” he approached the goblin and poked him hard into the chest. “And you?”

The wizard repeated the poke on the chest, Gloop responded with a reactive punch in the chest which sent the wizard 5 or 6 feet into some hedges.

The wizard recovered heaving from the blow “strong blighter too” he wheezed. Greandath had leaves sticking out everywhere from his beard and his posterior. He was not angry, just amused by this creature.

“This will not do” he muttered, he approached the goblin again who was still scratching his head like nothing had happened. The wizard could have easily struck out and killed him but he decided that this goblin could be an interesting development in his plans.

He pulled off his plumpy hat and put his gangly arm down it, his tongue out to the side of his mouth, he concentrated on what he needed. He pulled out several items like a lettuce to which Gloop winced, he didn’t like ground food as he called it, the lettuce bounced on his head.

Then a kettle was brought out of the hat “No no no, I must find it…it just won’t do” the wizard launched half his body into the hat and Gloop could hear jingling and jangling, crashes and bangs. “Ah-ha! Found it!”.

Greandath pulled himself out and he was brandishing a potion, bright green colour and looked slimy. Gloop licked his lips, he thought it was slug juice, his grubby hands were reaching and his nose was dripping with snot.

He couldn’t control his greed, the wizard unpopped the vial but he needn’t have bothered as stupid Gloop bit into the vial and started eating and drinking, glass and liquid whole.

Greandath screamed in horror “you’ll kill yerself you buffoon!” he slapped his hand against his face. Gloop enjoyed it, he really did, he was getting a sore throat and he could not understand why! His face contorted as the liquid settled into his third stomach, his eyes went crisscrossed again and he farted but this time green fumes came flying out.

He fell to the ground in agony.

The last thing he saw was the wizards confused face.